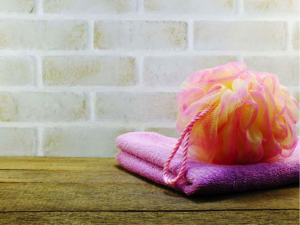 Taking a shower rids the body of surface-level germs and bacteria. The squeaky-clean feeling, however, isn’t thanks to harsh loofahs. In fact, most dermatologists don’t recommend them—and would definitely not use them on their face.

Loofahs are harsh on your skin

If you’re making the mistake of washing your face in the shower, you might not know that loofahs aren’t the best option for clean skin. “You should avoid rubbing with a loofah or washcloth as these are too irritating and will damage the skin,” says Benjamin Garden, MD, a dermatologist practicing in Chicago. “Gently use your fingers to rub the face wash on and gently wash off.” Over-washing depletes the skin of the natural lipids that are an important part of its protective barrier, which is why Peter O’Neil, MD, the Chief of the Division of Dermatology at NYU Winthrop Hospital on Long Island, also suggests using gentle cleansers and avoiding vigorous scrubbing.

On a germier note, Joel Schlessinger, MD, a board-certified dermatologist and RealSelf contributor, says it’s one of the things dermatologists never put on their facesbecause of bacteria. “I wouldn’t recommend using a buff puff or loofah,” Schlessinger says. “Loofah sponges are intimate with many unclean areas of the body and then sit around allowing bacteria to multiply within the nooks and crannies of the sponge.” Organisms colonize in these spaces, particularly in the warm, moist environment of a shower, per Dr. O’Neil. This creates the potential for serious infections, particularly in patients with weak immune systems thanks to disease or medication, he adds. But bacteria on loofahs isn’t a new discovery. Research dating as far back as 1994 shows loofahs can transmit species of bacteria that may cause infection.

There are some cases where it could make sense to use a loofah on your body. Dr. O’Neil occasionally recommends loofahs to patients with skin conditions that lead to a buildup of cells, such as psoriasis. If you do use one, take some precautions: Avoid over-scrubbing; limit use to once or twice a week; and always rinse the loofah thoroughly before letting it completely air dry, Dr. O’Neil says. Soaking it in vinegar or diluted bleach minimizes the growth of microorganisms, too, according to Dr. O’Neil. Now that you know better about using loofahs, note these 12 other things you should never do to your skin, according to dermatologists.

Font Resize
Contrast
Accessibility by WAH
Call Us Text Us